The Frugal Photographer's Non-toxic Photographic Image Developer is made in your kitchen with instant coffee and vitamin C.

With this developer, you should give your film two to four times the normal exposure. For example, expose ISO 400 film as though it were ISO 100.

Many substances can develop silver-halide films, including cola drinks, tea, coffee, red wine, human urine, and common kitchen and laundry materials. They are not in regular use for many reasons, some of which are obvious, but primarily because they are time-consuming, inefficient, and typically yield high-fog, low-density, unpredictable results.

To develop films, these substances must be mixed into water and the solution made alkaline. The alkalinity activates the otherwise inactive developer. The degree of alkalinity affects development speed and overall image contrast. Unfortunately, most simple "kitchen cupboard" developers require strong, caustic alkalis such as household lye or drain cleaner (both of which are dangerous for children to handle), and they require development times of about a half hour, sometimes much longer.

Here we present a seemingly simple formula that is actually quite sophisticated.

It combines two non-toxic developers, coffee and vitamin C, each of which is a weak and inefficient developer by itself, but which are "super-additive" with each other. That means, when they are combined, the combination is substantially more active than the sum of its ingredients.

It uses a relatively common laundry ingredient, washing soda, which is a mild alkali, as its activator.

UPDATE: in the years since this formula was first published, packages labeled "washing soda" have not been regularly stocked in grocery stores. However, the Arm and Hammer product labeled ARM & HAMMER Powder Laundry Detergent, Perfume & Dye Free is compounded with primarily sodium carbonate, plus a few photographically-inert wetting agents, and you can substitute it for the washing soda in this formula.

This developer creates more background density ("fog") than commercial developers. However, the density is easily dealt with in printing or scanning, and can be ignored.

Because it is non-toxic and does not use caustic alkalis, young children can safely experiment with it, as long as they are careful to not drink it, since it would undoubtedly make them sick. And keep it out of your eyes!

Instant coffee is preferred to brewed coffee only because it is easier to use, and is more likely to be of uniform strength from one batch to the next. There is no reason you can't experiment with brewed coffee. Vitamin C crystals are preferred to tablets, since tablets include inert binder that must be filtered out. Citrus juice has too little ascorbic acid to be useful (one cup of orange juice from concentrate contains only about 1/10 of a gram of ascorbic acid. I know MacGyver develops film in orange juice, but this is real life).

Caution: this mixture has a revolting burnt-coffee smell. It stains film brown, but the stain washes out during the final wash step.

This formula is presented with rough, whole-number teaspoon measures, because it is not possible to know in advance the potency and activity of ingredients sourced from a supermarket shelf. You should probably experiment with varying amounts of coffee. Keep the ratio of coffee to vitamin C at roughly 1:1 to 1:1.25, by weight, or about 4:1 by volume.

You should definitely experiment with development times. Shoot a roll of black and white film outdoors, with every frame showing the same scene at the same exposure. In the dark, cut the roll into six more or less equal strips, excluding the tongue. Develop one strip for, say, fifteen minutes, and after it has been fixed, washed, and dried, examine it. Wet film looks considerably different from dry film, so be sure you examine it after it has dried. You should be able to guess whether to develop the next strip for a longer or shorter time. After you've developed and evaluated several, you should have a good idea of the proper development time.

This formula should give you excellent, printable images with just about any brand of instant coffee crystals. Play with it for a while, and be prepared to be amazed.

You may be interested in the original Shutterbug Magazine article that provoked these experiments, which is on-line at: http://www.photoglass.com/PHG/PVT/SBug.htm. Please note: The article implies that salt water can be used as a fixer. In theory, yes, but in fact, fixing in anything other than thiosulfate is insufficient and impractical. Fortunately, sodium thiosulfate can be bought cheaply from pool supply companies, who sell it as a chlorine reducer. 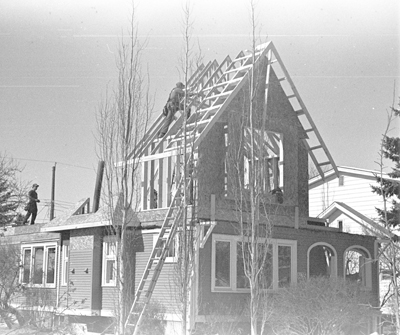 This photo was taken on ISO 400 film, exposed at ISO 100, and developed for 15 minutes in the Frugal Photographer Coffee Developer.