Put that APS camera back to work 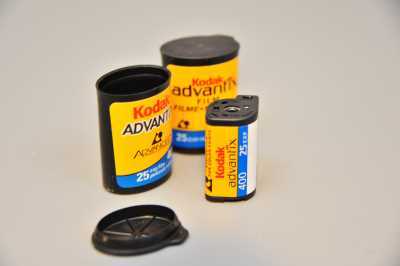 This long-outdated APS film (ISO 400, 25 exposures per roll) has lost speed and contrast, and its colors have suffered.
Be aware that this film has deteriorated with age, and can not give images like fresh film. Colors will be heavily distorted, and only images exposed in bright light will have useful detail. It will require editing before you print it.
Ask your film lab to scan and upload the negatives, then use any of the readily-available color-correction programs to modify the colors or convert the images to black and white.
Be sure to examine the example photos so you know how this film is best used.

That APS camera has a lot of life left!

APS equipment is long out of production, but some APS cameras are highly capable and well worth using. Some, particularly the pro-level Nikon, Canon, and Minolta models, are wonderfully capable.

APS film has not been manufactured since 2011. Films that were frozen soon after being manufactured will give the highest quality image contrast and color fidelity, comparable to fresh film. Films stored cool or at room temperature will undoubtedly show some deterioration, depending on the exact conditions of storage. All of the APS films I have ever seen were packaged in moisture-proof packaging, so deterioration due to moisture should not be a problem.

This photograph was taken at the Calgary Stampede many years ago with a Canon ELPH, on the expired Kodak APS 400 film offered here. When the roll came back from the processor (London Drugs, in Calgary) I scanned it and discovered the image had a heavy blue cast due to color deterioration over time. The image you see is the result of simple automatic color restoration using a free photo editor (Paint.Net). More extensive editing with a more capable editor could easily improve the colors.

APS ("Advanced Photo System") was introduced in 1996 as a way to address a persistent problem that many amateur photographers struggled with, which was how to get film into and out of the camera without ruining it. The Instamatic and Pocket Instamatic cassette designs had accomplished that, but they were bulky and, by 1996, had been in the marketplace for 35 years. APS was meant to drag photography away from its 19th-century origins and embed it in the age of semiconductors and digital printing.

But in 1996, Japanese engineers were already making it easy to load and unload a small, motorized, high-quality, pocket-sized 35mm camera: just lay the 35mm cassette down with the film tongue across the film plane, and close the back. To unload, press a button marked "rewind". The typical amateur photograper had a lot of alternatives to laying out money for a new APS camera, and then paying a premium for processing. Professional photographers had no reason at all to switch to APS. The wonderful new technology failed to take off.

And it was wonderful technology. The film stayed inside its light-tight cartridge until it was inside the camera, and your negatives were delivered to you safely inside that same cartridge, where no fingerprints or dust could ever harm them. To re-order prints, you referred to a digitally-produced index print. Most cameras recorded details about the image and its exposure in the form of data written into the invisible magnetic coating on the back of each negative. And the negatives themselves were on a base of polyethylene naphthalate, far tougher and more resilient than the acetate film base used for 35mm.

APS was developed and commercialized by a consortium of competitors: Kodak, Fuji, and camera manufacturers Nikon, Canon, and Minolta. It was licensed to others, and all the major companies soon had APS films and cameras available. By 2004, not even a decade later, the party was over. Kodak discontinued its APS cameras that year, when it also stopped selling Kodak-branded cameras in the developed world. That was a year after digital cameras overtook film cameras in sales, worldwide. Kodak and Fuji discontinued APS film five years later, in 2011.

Get your film processed


If there is no local source, and if you don't want to do it yourself

Process your film at home

You do not need a darkroom.

Film processing is not difficult, but like cooking and crafting, it will reward you for being careful and systematic.

A dark bag lets you remove film from its protective cassette or paper wrapping, and load it into a processing tank in daylight, with no need for a darkroom.

Temperature control is important, so use an accurate thermometer. It is important that all of the chemicals are at the same temperature during the complete process.

A light-tight processing tank with a spiral reel for your film is standard equipment, but alternatives exist (a few minutes searching the Internet will give you some idea).

When your negatives are dry and ready to be handled, scan them using an inexpensive scanner, and print your images on a photo-quality inkjet printer.

If your local camera store doesn't have the dark bag, processing tank, and thermometer you need, you can buy them here.