For all cameras that require Pocket Instamatic film cartridges

Color film made by Agfa, for 110 cameras

"Quality" brand private label 110 film, made by Agfa. 24 exposures, ISO 200. This film is outdated, but it still gives acceptable images. 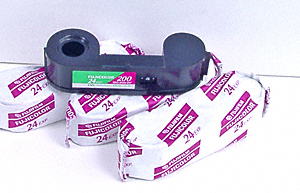 Outdated Fuji color film for 110 cameras, still gives acceptable colors in bright sunlight. ISO 200 for use in all 110 cameras, both simple and sophisticated.

Has lost some sensitivity and contrast, so best in bright daylight (or with flash).

Although thrift shops are no longer overflowing with 110 cameras the way they once were, some highly useful cameras show up fairly regularly, and are still being actively traded among camera collectors on auction sites.

There are essentially three quality levels available. The least expensive, and least capable, but arguably the most enjoyable, are the cheap, basic minicameras, so tiny that they don't even have film compartments — you clip the film cartridge directly onto the back of the camera. 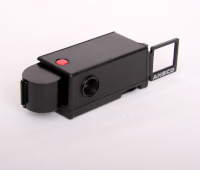 These cameras have a simple shutter that operates at about 1/50 of a second, so you should only use them outdoors in daylight. Their non-adjustable lenses are fixed focus, so you will not have in-focus images of objects closer than about four or five feet. The cheapest have simple molded plastic lenses that get the job done. The best (like the Ansco 50) have excellent, well-designed meniscus lenses, precision-molded from optical acrylic, and they are well-made, light-tight and flare-free, and give surprisingly good results.

These are not the cameras to use if you are after high technical quality in your images. They are the cameras to use if you want a camera you can carry in your pocket, that gives you memorable, real-world, charming images that you stumble upon in your neighborhood, or at the skate park, or wherever the streetscape is begging to be documented and a conventional camera is impractical or out of place.

The middle range of quality is represented by the millions of simple, low-cost 110 cameras that gave so much pleasure to families and adventurous kids in the middle decades of the post-WWII period. Most of them had one shutter speed and a simple fixed-focus lens. Later on, some had excellent lenses, flash capability, and, occasionally, motorized film advance.

On the opposite end of the spectrum, high-end Kodak, Canon, Rollei, and Minolta 110 rangefinder cameras are lightweight and can give superb images. Excellent single-lens reflex 110 cameras by Pentax and Minolta are readily available. The Pentax SLRs have interchangeable lenses, while the Minoltas have high-quality zoom lenses.

A 110 negative is less than one-quarter the size of a 35mm negative, and only rarely can you successfully enlarge it beyond 8x10 inches. But with a reasonably good camera and careful technique, there is no reason you can't get excellent conventional snapshot-size prints, 4x6 inches, up to 5x7 inches. 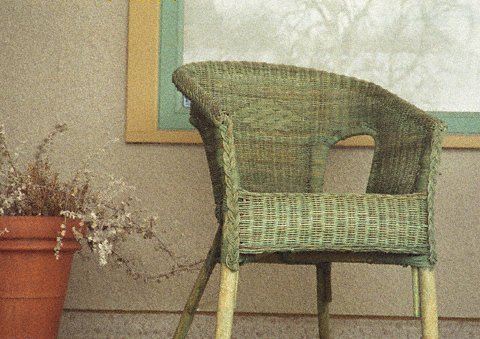 This photograph was taken in the early 1990s with a Pentax 110 SLR, on Fuji film. As you can see, the camera's lens is perfectly capable of capturing the texture of wicker furniture on a tiny (11 x 17mm) 110 negative.

110 "Pocket Instamatic" film cameras and cartridge films were introduced by Kodak in 1972, as a miniaturized version of their 126 Instamatic format. Competitors soon expanded the variety of cameras and films available, and the format remained highly popular for the next twenty years.

Every major film manufacturer except Ilford, and every major camera manufacturer except Nikon made products in this format. Among the film companies, Kodak and Fuji dominated the market in North America. Agfa and Ferrania, two first-rate western European firms, produced millions of rolls packaged as "house brand" films for supermarket and drugstore chains, as well as in their own branded packaging. To my knowledge, no east-bloc manufacturer made 110 films or cameras.

Kodak stopped making 110 cameras in 1994, and ended 110 film production in about 2006. By about 2009 no more 110 film was being manufactured by film factories, although stocks were supplied from warehouse inventory for several more years. Today, 110 film cartridges are sold by several specialist suppliers that assemble them with freshly-made film sourced from the world's few remaining factories where camera film is still being coated.

Get your film processed


If there is no local source, and if you don't want to do it yourself

Process your film at home

You do not need a darkroom.

Film processing is not difficult, but like cooking and crafting, it will reward you for being careful and systematic.

A dark bag lets you remove film from its protective cassette or paper wrapping, and load it into a processing tank in daylight, with no need for a darkroom.

Temperature control is important, so use an accurate thermometer. It is important that all of the chemicals are at the same temperature during the complete process.

A light-tight processing tank with a spiral reel for your film is standard equipment, but alternatives exist (a few minutes searching the Internet will give you some idea).

When your negatives are dry and ready to be handled, scan them using an inexpensive scanner, and print your images on a photo-quality inkjet printer.

If your local camera store doesn't have the dark bag, processing tank, and thermometer you need, you can buy them here.